Every week I am asked questions by my lovely  readers. I thought I would answer some of the most popular questions I receive about I Should Have Said in one place.

HAVE YOU EVER BEEN BULLIED?

I was verbally attacked for no reason in public at the planetarium in front of 20 families, including my own two children. I didn’t have my wedding ring on and a man was yelling at me, “I can see why your husband left you!“ It was one of the most embarrassing and mortifying moments of my life! I kept thinking for two weeks, “I should have said….,“ and then I got the idea for the website.

I have a close relative who has said many unkind things to me over the years and I still need comebacks for this person. When I was twenty and my first serious boyfriend dumped me I was on the floor sobbing with despair, this person actually said to me, “You will never get better.” Having a toxic family member helps me to understand what it is like for many of my readers going through similar situations.

Also, one of my children was bullied in grade 5, when my son’s former best friend decided to turn all of the boys in the class against him. It was very stressful, however we had to figure it out and turn the situation around as a family. Using clean comebacks really helped my son shut down bullies at school.

I am creating a book of clean comebacks to help families,  and I have created another website called www.bulliedtoempowered.com to help other families.

DO YOU THINK USING COMEBACKS IS A FORM OF BULLYING?

Using comebacks isn’t bullying if you are defending yourself. I do not support bullying others, this site is for verbal self-defense for the people who need it.


When someone is verbally putting you down and publicly embarrassing you it is like being sucker punched. Some people say be the bigger person and don’t say anything back, which would be like letting someone hit you again and again in the head and not telling them to stop. The purpose of the comebacks are to get people to stop verbally bullying you, and also set boundary expectations for others watching.


WHY DO YOU RUN THE SITE?

I run the site because it helps many people who are being verbally bullied. Knowing that I have helped someone who is being picked on, to change their situation is very rewarding. I have had readers turn a bullying situation around, get relatives to stop making snide remarks and helped people stand up for themselves. Basically, I help people take their power back when someone is attacking them.

Many of our readers have to deal with really difficult situations, for instance their parents say mean things to them putting them down. Other people who reach out have friends who make snide comments, the cruel things they say show they aren’t really friends. Moms whose kids are being picked on at school send requests and I have shown them clean comebacks that have helped stop the bullying.

Yes, I am married and I have two sons. My youngest son, Lachlan, is really quick witted and with comes up with great comebacks and I have used many of his responses on the site. His comeback is the number one voted spot for noob.


WHY DON’T YOU HAVE YOUR ACTUAL PICTURE ON THE SITE? 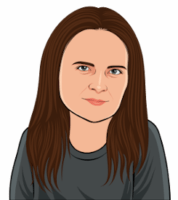 The reason I have an avatar and not my real image is because my children asked me not to use a real picture. They like to know that they have the site as a secret weapon if someone is picking on them.

I will tell you a funny story, one day my oldest son was at school and a classmate was looking at my site. She was saying it was a great site and she really liked it. Jake found it a surreal moment, when something I had created was out in the world being viewed by a classmate. He didn’t tell her I owned the site, and she probably wouldn’t have believed him anyway!


WHAT MAKES A GOOD COMEBACK?

I think a clever response is always the best comeback. There are two reasons for using comebacks, one is a verbal attack where the person is putting you down or attacking you and the other is fun banter.


HOW DO YOU DECIDE WHICH COMEBACKS TO ADD TO THE SITE?

SOME OF THE COMEBACKS ON THE SITE ARE ON THE RUDE SIDE, ARE YOU OK WITH THAT?

We try to provide a range of comebacks so that people will find one that resonates with them. What you may feel comfortable saying may not work for someone else. I personally don’t swear, at least I try not to, but many of our readers are in environments where people use rude language.

My goal with this site is to give people the sayings and language to verbally defend themselves against bullies. If some people need to swear, that’s their business, I don’t judge.


HOW DO YOU COME UP WITH ALL OF THE GOOD COMEBACKS?

Whenever I see a great comeback line, I add it to my list. I have a huge document that I refer to when I am trying to come up with something that is a good fit for a situation. It can take several months to find all of the good comebacks to fit with a post. Sometimes I find better ones and update the posts as well.

GO TO TOP OF PAGE