comebacks for any situation

When you have accomplished a lot of things and you are proud of your achievements, insecure people may accuse you of bragging. You can either worry about being called a bragger, hide your light or find a new group of people to hang out with who want more out of life.

Envy can kill relationships, people who have jealousy and competitive feelings may try to take others down. Have you ever heard of the crab mentality where crabs could easily escape from a bucket but some of the crabs pull the other crabs back down to the bottom? The same behaviour happens with people, some individuals will try and reduce the confidence of others by and try to stop their progress. They do this by calling others braggers, by sabotaging their actions and putting people down.

Successful people reach out to other successful people and find mentors who help them to move up to the next level. Sometimes you have to leave the people on the path to nowhere behind, and find a new group of like-minded people.

Next time you are accused of being a bragger by a small minded crab, use one of our clever comebacks and don’t worry about what other people think.

Vote for the best comeback when you are called a bragger

Mohamed Ali was one of the world’s greatest braggers

Not only was Mohamed Ali an amazing boxer, he was also a world champion bragger. Ali had a big personality, and he used it to psych out his opponents with his bragging.

He was famous for his quotes that he would use in the ring to excite the audience.

It’s hard to be humble when you’re as great as I am. – Mohamed Ali

If you even dream of beating me you’d better wake up and apologize. – Mohamed Ali

Braggin’ is when a person says something and can’t do it. I do what I say. – Mohamed Ali

I am the greatest, I said that even before I knew I was. – Mohamed Ali

Got any comments, questions or tips for dealing with someone who calls you a bragger? Share them in the comments below.

Some people think they are just proud when in reality they come across as boastful and over the top when they brag about their accomplishments, money, or material possessions.

Most braggers are insecure and feel the need to inflate their ego to appear bigger in front of their peers. People who are confident about whom they really are don’t feel the need to show off and seek attention and approval from others.

I saw a humble brag post on Facebook recently. A mom posted her son’s straight-A report card as a post. It was in such bad taste. A report card is a personal matter, and sharing it publicly with others is uncouth. Next, the bragging mom will be sharing her work reviews or yearly bonus on Facebook.

If their bragging exceeds the limit beyond which you can put up with, here are a few snappy comebacks to stop the bragger in their tracks.

What to say to a bragger

Got any comments, questions or tips for dealing with someone who brags? Share them in the comments below.

Everybody gets grumpy from time to time. We all have off days. If your husband has been in a continuous bad, sulky mood, it can be tiring to be around that kind of energy. Nobody wants to walk around on eggshells to ensure they don’t upset the grump in the living room.

Is your husband moody with you and nice to everyone else that he comes into contact with? If he is grumpy with you and warm and fuzzy on the phone to friends, then you need to have a conversation about what is going on.

Melody’s husband overreacted to little things and spazzed about them if he was in a bad mood. If she was having a conversation with him and made a comment, he would get annoyed and say he was being interrupted. He never got the memo that a conversation is supposed to be like a game of tennis instead of bowling. He never showed this annoying behaviour with anyone outside of his immediate family.

If you get tired of his grumpy attitude, here are a few zingers you can use to let him know. These are best said in a joking way and with a smile. If you’re lucky, maybe he’ll even get his own dinner tonight!

Got any comments, questions or tips for dealing with a grumpy husband? Share them in the comments below. 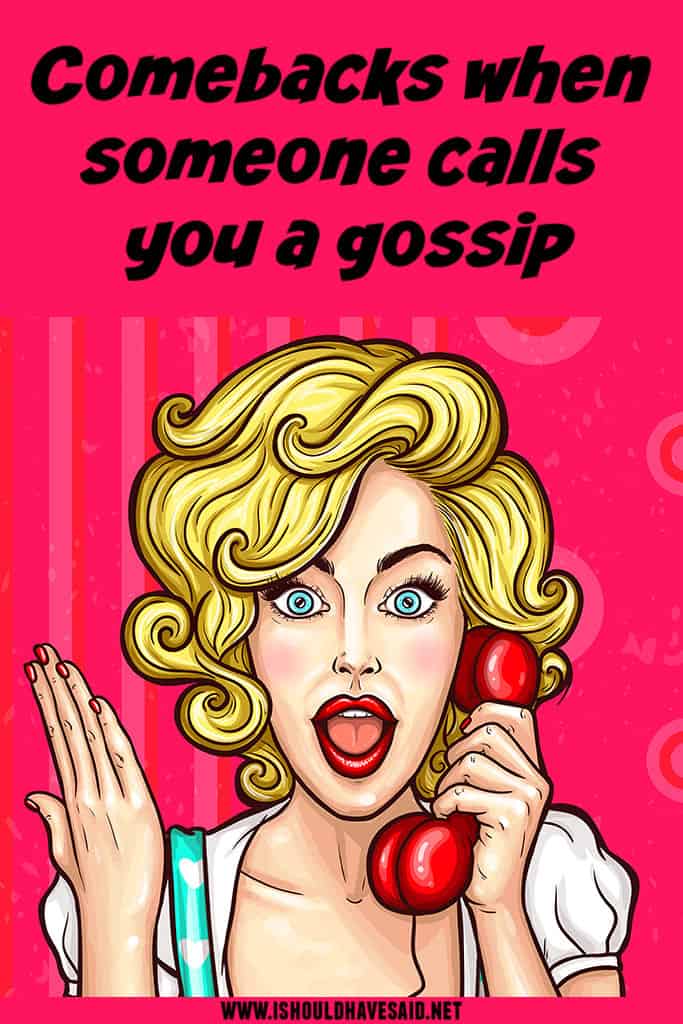 If you are constantly talking about other people’s business and not your own, chances are good that you will become known as a gossip.

A gossip holds derogatory conversations, at other people’s expense without their knowledge. If you are talking about friends behind their back you will not be the most popular girl in town once they found out.

If people complain about your gossiping ways, use one of our clever comebacks.

Go ahead and vote for what you think is the best answer to the poll below. If you can think of a better comeback, let us know.

Vote for the best comeback when someone calls you a gossip

Got any comments, questions or tips for dealing with someone who calls you a gossip? Share them in the comments below.