What to say if people call you gullible 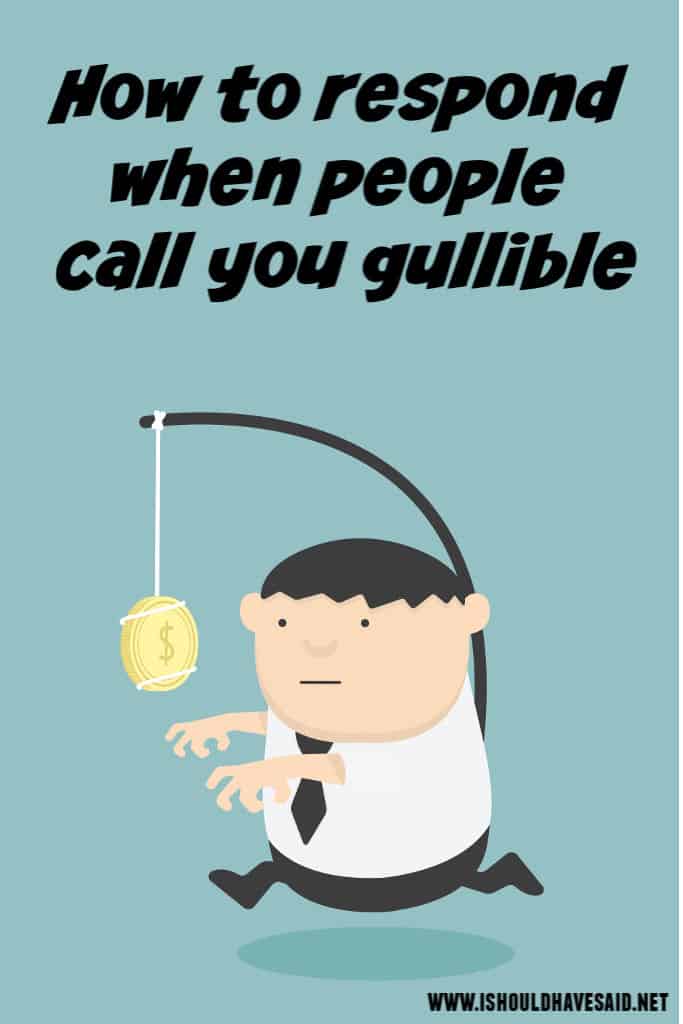 When someone calls you gullible, or a mug, the British term for naive or being fooled or easily pranked, you might feel a little embarrassed. The truth is you shouldn’t feel bad about thinking the best of other people and trying to see them in their best possible light. It would be a pretty sad world if we were all a bunch of cynics who saw the worst in others.

When you easily accept what people say it means that you see the best in people and you’re not judgemental. After all, being trusting is not a crime the only bad thing about being gullible is you could be targeted and victimized by dodgy people.

When Claire was at university her friend set her up and pranked her in front of a group of friends. She thought the things Sarah said to her were true and that she was a good person, but she quickly found out otherwise. Claire fell for Sarah’s nonsense once, but she decided never again and ended the friendship. You may be gullible and trusting once, but fool me twice I don’t think so.

Here are a few things you can say next time people call you a mug.

Vote for the best comeback for being called gullible

Got any comments, questions or tips for dealing with someone who calls you gullible? Share them in the comments below.

Funny comebacks when you are called smarty pants

Urban dictionary defines smarty pants as someone who displays intelligence in an annoying way.

Smarty pants can be a cleaned up way of calling a person a smart ass, it is not a compliment, and they are basically telling you that you’re too smart for your own good.

Maybe you put in the time at school or your profession showed amazing discipline and took risks and created an amazing life for yourself. People who haven’t got anything going on always have something negative to say but nothing to contribute.

People will criticize and be envious, but they themselves are not willing to necessarily put in the work. Keep on shining bright and being who you are. Don’t let low-level people upset you.

If you want to say something back, use one of our great comebacks below.

Vote for the best comeback when you are called smarty pants

Got any comments, questions or tips for dealing with someone who calls you smarty pants? Share them in the comments below.

Funny replies when you are called irresponsible

When people call you irresponsible, it could be because you are not doing what someone else thinks you should be doing.

People often have resistance if you don’t live your life according to their agenda. If you come from a family of three generations of dentists, they are not going to like it if you buck the trend and decide to become a media influencer. Your mom probably won’t appreciate your career choice, even if you point out that you are earning more than her by flogging shoes on Instagram.

In this day and age of political correctness and zealous people, you are going to sometimes get called irresponsible, whatever you say or do. When you don’t cater to someone else’s needs or opinions, you are going to get called out for offending someone or sharing your views that some would consider provocative.

It is important to live your life on your own terms as long as you are not physically hurting anyone else. Note, that doesn’t include them getting psychologically “hurt” by different thinking and perspectives. You only have so much time on the planet, and to make the most of your life you have to do what you want to do.

Next time someone calls you irresponsible or your opinions awful, humor them with a comeback from the list below, and keep on living your life on your terms.

Vote for the best comeback when someone calls you irresponsible

Got any comments, questions or tips for when someone calls you irresponsible? Share them in the comments below.

Funny replies when someone calls you a pain in the ass

Urban dictionary describes a pain in the ass as, “someone who has no purpose but to piss you off.” Have you purposely tried to drive someone crazy by getting up in their face or generally being annoying?

There are certain behaviours that people find annoying all over the globe. If you are doing any of the following you might be acting like a pain in the ass: talking excessively, talking loudly, hyper, overly pushy, interrupt conversations, call or text constantly, are demanding and act like a know it all. If you don’t want to be a pain in the arse, then do any of the above and you should be fine.

Sometimes you’re not the problem at all, the person you are talking to may have had very little sleep, broken up with his girlfriend and is not in the mood for any shenanigans. Perhaps they will appreciate your sparkly personality more on another day.

If people are giving you a hard time use one of our great comebacks below. 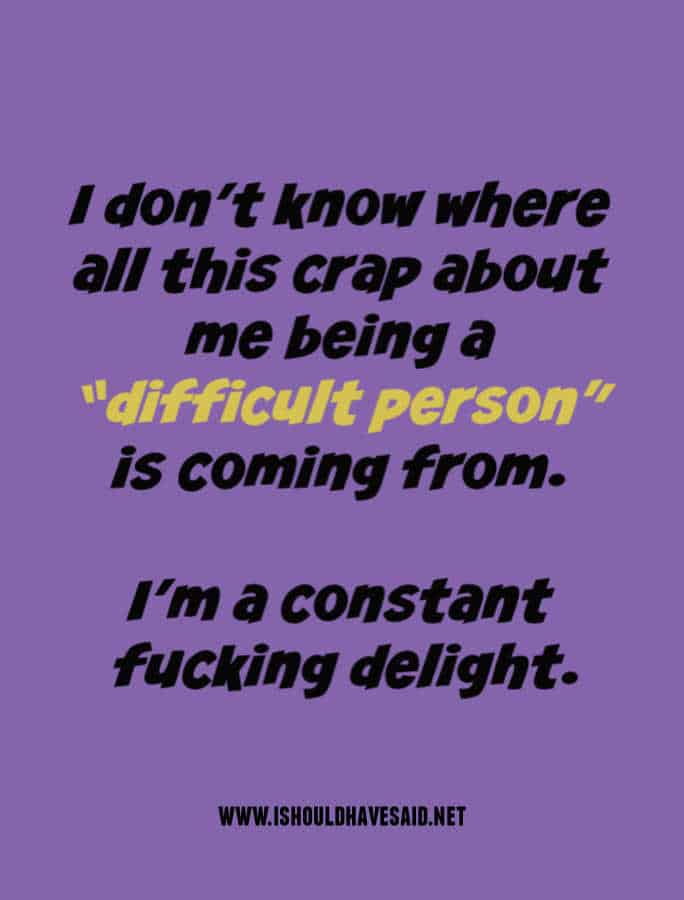 Got any comments, questions or tips when a person calls you a pain in the ass? Share them in the comments below.

What to say when you are called a spaz

If someone calls you a spaz they probably see you as someone who overreacts and freaks out about minor things. Maybe you do get all wound up, hyper and “spaz out” as most of us do at some point in time.

Another definition of spaz is a person who is running around acting like a crazy person.

In the US, most people don’t know where the term spaz actually comes from. The word spaz originates comes from spastic cerebral palsy, a condition that causes the body to move in a jerky and stiff manner. In the UK spaz is considered a derogatory term and it is offensive to people with disabilities.

Next time you freak out and are acting jumping around, use one of our clever comebacks when people give you a hard time about it.

Vote for the best comeback when people call you a spaz

RJ Mitte is an actor and model who has cerebral palsy. He is famous for playing Flynn White on Breaking Bad. He seeks acting opportunities where he can showcase his disability and educate viewers.

When he was born, Mitte wasn’t breathing and it resulted in permanent brain damage. A few weeks after his birth he was adopted by Roy and Dina Mitte. When he was three years old he was diagnosed with cerebral palsy.

When he was a teenager his family moved to LA, where he started to pick up acting jobs. By the age of 13, he was financially supporting his family including his sister. RJ is a pretty remarkable guy.

Got any comments, questions or tips when someone calls you a spaz? Share them in the comments below.