If people make rude comments about your teeth it can be embarrassing and hurtful. Not all of us have been blessed with perfect pearly whites or pencil straight teeth. For some people, no matter how much they brush their teeth they are not going to look as white as someone who is blessed with naturally perfect teeth.

The good news is that if you can afford it, you can get cosmetic dentistry and get the problem fixed immediately. The bad news is until you do so, your teeth are probably pretty visible every time you speak so there is nowhere to really hide, since your mouth is smack dab in the middle of your face.

I know some folks who are really conscious about the state of their teeth and smile with their mouth closed and cover their mouth when they speak, they do it without even realizing it.

When people shame others about their appearance is says more about them than it does about you.

Next time someone who isn’t a dentist makes rude comments about your teeth, use one of our clever comebacks below and shut them up.

If you have a large forehead, no doubt you have been roasted for it many times. There is even a 5head club, which Urban Dictionary defines as, “When someone’s forehead is so big, that it can no longer be called a forehead. It is a 5head.”

Don’t feel bad if you have a big forehead. We all have something different about that people love to point out and make fun of. At least you can hide it under bangs or a hat. It’s easier to deal with than having a big honker of a nose smack in the middle of your face.

Well, there is scientific evidence to prove that people with bigger heads are more intelligent. The next time your pea-brained friend tries to forehead shame you, it’s a fact you might want to bring up.

Here are a few fun comebacks you can use next time someone makes about a joke about your 5head.

Vote for the best comeback when people diss your big forehead

Some of the most beautiful women in the world have large foreheads and their doing OK. Look at Rhianna, rocking it as one of the major sining talents, she doesn’t let the 5head comments get in her way.

Yep, the prettiest girls all seem to have the biggest foreheads.

Tyra Banks is thankful for her large forehead

If Tyra didn’t have a large forehead she might not have had the career as a supermodel. Check out  what Tyra has to say….

Got any comments, questions or tips for dealing with a person who makes fun of your big forehead? Share them in the comments below.

In the last week, I have received several emails from people asking for a great comeback when someone says that you have a flat ass. Remember, you could look like Rosie Huntington-Whiteley, and someone will still find fault with what you look like. Having a flat booty is certainly not the worst thing in the world.

You can do ten hours of Brazilian bum lift videos, and you may not see much of a change. Apparently, genetics is the number one factor that controls that shape and size or your bum. Age and your ethnicity also play a part. Certain ethnicities have different hip and waist ratios. A younger woman also stores fat in her rear end, giving a pert appearance.

If people are making fun of you because you don’t have a big booty, use one of our clever comebacks and shut them up for good.

Megan Fox has been slammed by the media for not having a big butt. She is long and lean and a truly beautiful looking women but the media, including TMZ, have constantly commented on her tiny behind.
If you feel self-conscious with your flat ass imagine what it is like to have the paparazzi following you wherever you go focusing on your butt, and then shaming you in the media. Yeah, your life isn’t so bad!

The appearance of the ideal butt has changed over the years

Back in the 90s, you would be considered lucky to be ultra-thin and look like a supermodel with a small bum, which was hard to do if you were a curvier woman.

In 2000, toned fit medium sized bottoms were are the rage with cover girls like Britney Spears showing us what we should look like.

Since 2010, Kim Kardashian, Nicki Minaj, and Beyoncé have made the fuller booties popular and brought the look mainstream.
time.

Got any comments, questions or tips for dealing with someone who says you have a flat or small butt? Share them in the comments below.

Hi Bryn!?? I recently cut my hair (it used to be really long) into a pixie cut. I thought it looked pretty cute but apparently, I look like a boy now because of my short hair (I am definitely a girl). A lot of people think so and call me a boy. Some people are just plain rude about it but others are genuinely confused, but either way I end up awkwardly standing there as my parent explains that I just have short hair. Every time this happens I wish I had something to say back, a badass response for the rude people and a subtle way to correct the confused people… any ideas?

Bryn Answers: When people want to know about your gender

You are the third girl in a week who emailed asking what to say when people get your gender wrong. Yup, girls certainly don’t appreciate being mistaken for a boy.

Most of the time people don’t mean to be insulting when they assume that a person is the incorrect gender. We are socialized with stereotypes from a young age, boys have short hair and girls have long hair and like to wear pink.

People in customer service roles usually don’t have time to look closely at the person they are helping, they are too busy trying to do their job and get through the day. When someone finds out that they find out they’ve insulted you and called you the wrong gender they are usually horrified, and in some cases afraid they may get in trouble at work.

Whatever the case, here are a few things that you can say next time someone gets your gender mixed up. 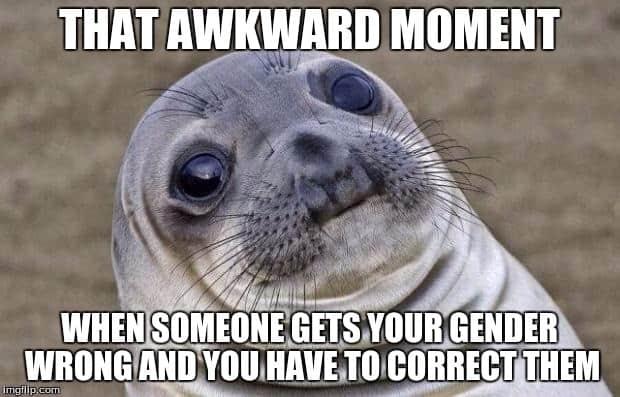 People are born in all shapes and sizes, some women have bigger boobs than others. It’s kind of funny if you watch a movie in the 1970s women have normal size breasts, now everywhere you look women have giant bazookas.

See the most popular comeback determined by I should have said voters. 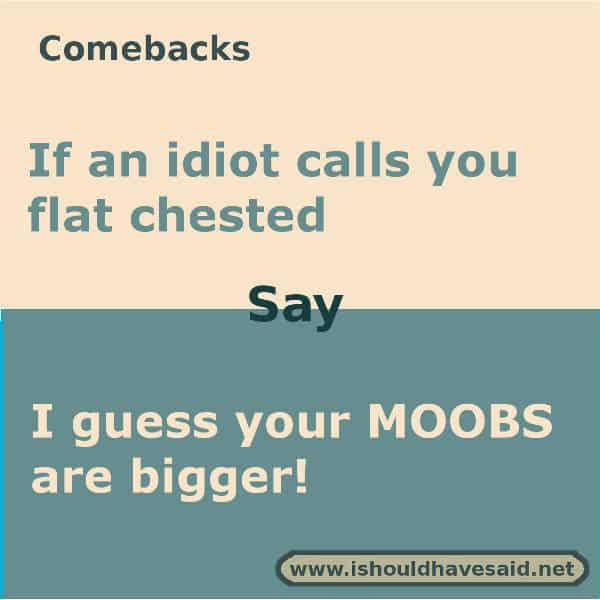 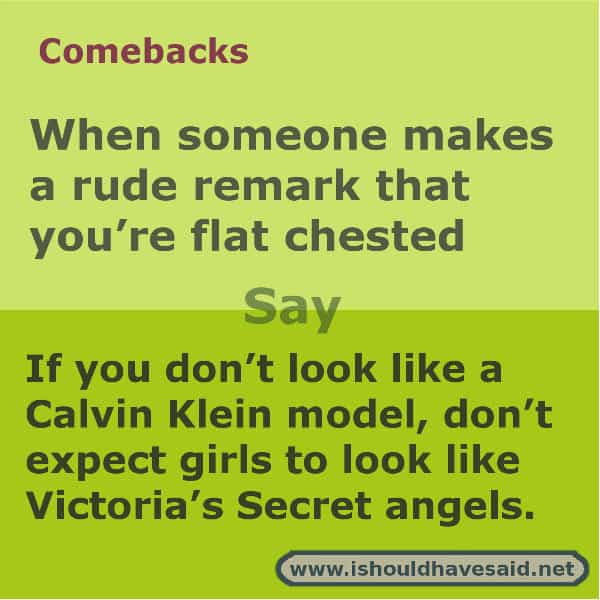 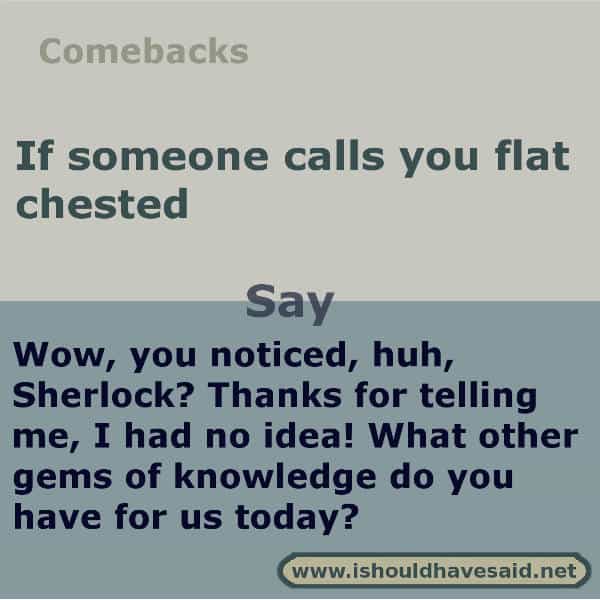 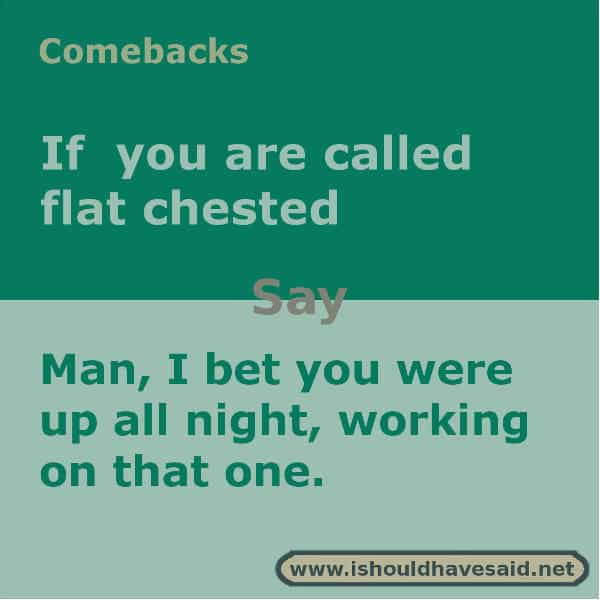